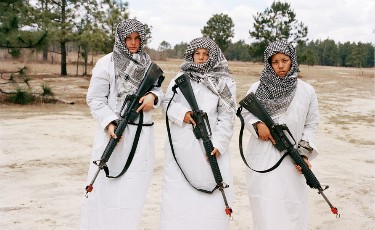 The exhibition ‘Reality Check’ staged by Fotodok shows work by photographers who mix documentary and fiction. One of them is the American Claire Beckett (32), who photographed at various military installations where army and marine corps personnel are trained for their deployment to Iraq and Afghanistan. Last year work of hers was include in the Noorderlicht show ‘War Zone’.
Beckett came to the Netherlands to give a talk about her project ‘Simulating Iraq’ and its predecessor, ‘In Training’. You would have wished that the information she provided had been available at the exhibition: the already rather alienating pictures became even more surrealistic after hearing her tell about them
Beckett lived in Zimbabwe as a graduate student and worked for two years in Benin as a Peace Corps volunteer. Then she went to graduate school and decided to do a project about war. ,I wanted to get at the heart of who are soldiers are – those of us without family in the military are very disconnected. War belongs to us all. We voted for it. Americans need to take more responsibility for it.”
Het first project was ‘In Training’, about how soldiers are trained. She learned the term weekend warriors: working during the week, soldiering on the weekend. One of her pictures shows two girls sitting in the forest,one of them heavily made upas if she were on her way to a party rather than a battle. ,,You can see their bodies changing from youths to adults, from civilians to trained and equipped soldiers.”
Many of the trainers are veterans who have done or more tours of duty already (and survived, I think to myself).They are the elite and are allowed to play the role of the bad guys. Working in the simulated villages is yet another tour of duty. I asked Claire if it helped them get over their traumatic war experiences, but the answer was: no. They are still, in a strange way, on the battlefield, they can’t move on yet. They are surprisingly open towards Claire, she says, they tell her about their nightmares, show her their medications. ,,If they flip out they’re sent over to the stables to work with the horses.”
There is a big difference between them and the good guys, the ordinary villagers. In this imitation world most of them are locals for whom this is just a job. You can’t mistake them for Iraqis, the Americans are much bigger, fleshier and whiter than their Iraqi of Afghan counterparts. Most military bases are in poor rural areas, and posing as an extra is a welcome source of income. One of the women, Sylvia, went to the trouble of buying herself a pretty blue headscarf. For the recruits, however, it is all standard issue. An acute observation of Beckett: ,,There are not many ways to indoctrinate recruits anymore. You can’t beat them – but you can make them wear ugly glasses.”
For ‘In Training’ she made a photograph that was the seed of ‘Simulating Iraq’. ,,On one of the bases I ran into three women in long Arabic dress with AK47’s. They were trainees. They were dressed that way in order to get them into the mindset that you have to assess whether someone is an enemy combatant in disguise or a civilian.” In ‘Simulating Iraq’ the identity game goes even further: the trainees are assigned Iraqi identities. Beckett talked to the soldiers about their role. ,,How does your character feel about the Americans being here in his village? Why is he fighting? How do you feel in your role?” It’s probably the first time anyone ever asked them this.
Beckett uses a big, cumbrous 4×5 view camera that makes analogue plates, which she then enlarges on a scanner into digital prints. She cannot, and does not want to photograph action. Het pictures are more formal, and completely separate from journalism. She asks the soldiers to pose: ,,So whose turn is it today to be photographed?” Sometimes the recruits have to repeat an exercise for the camera, for example the private who gets back downs and crawls through the mud yet again for the picture. ,,The process reinforces the concept.”
Is her way of working a kind of simulation too? Indeed, says Beckett, ,,I am reproducing the simulation.” 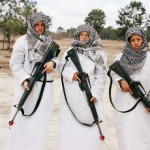