I arrived in Boston just in time to tag along with my friends Matthew Kiefer and Nan Porter to a high-style opening for sponsors of the exhibition Dale Chihuly: Through the Looking Glass at the Museum of Fine Arts (http://www.mfa.org/exhibitions/chihuly), of which they are patrons. The whole event had a slightly surreal tinge to it. No doubt in part because I was jetlagged, but also because of the nature of Chihuly’s work, with its orgiastic colors and woozy swirling underwater shapes.

The most spectacular one is the ‘Lime Green Icicle Tower’, a prickly day-glo green sculpture made of 2400 ‘fronds’ that is 42 feet high (14 meters) and weighs 10,000 pounds. In his extremely brief welcoming words Chihuly said that 12 people from his Seattle studio were here for 3 weeks to put the show together.
The exhibition is controversial inside the museum and among sponsors. The British director of MFA, Malcolm Rogers, understands the need to bring in more, uh, accessible shows to counteract the F in the MFA. But there are also some who feels he is compromising the museum’s status with a Chihuly exhibition. I heard the curator of photography say something disparaging about bringing ‘crafts’ into the museum.

A whole show of Chihuly’s riotous forms and colors is a bit much of a good thing. You can’t help but notice how much they are variations on a theme – as if he had a huge warehouse from which he assembles various parts and combined them in a boat, or on a shiny glass platform, or on glass ceilings. At least he has no intellectual pretentions. The clear glass ceilings covered with luminous colorful glass sea-like objects he calls ‘Persians’, acording to the accompanying text, simply because that sounds exotic.
The opening also gave me the opportunity to see Norman Foster’s extension to the MFA, the plans for which were underway when I was a Loeb Fellow at Harvard (2006-’07). The approximately one thousand people who attended the opening – a fascinating cross-section of blue-blood Boston society – made it rather hard to judge the building in its pristine state, but I was impressed by the way he covered over a courtyard with a huge glass and stone box that still worked well, also acoustically, with large numbers of people buzzing around. The museum didn’t have a space like this for big and/or fancy openings and receptions, and given the fact that museums depend on events for so much of their income, these social spaces are indispensable in the modern-day cultural economy.
The event was in full swing, and director Rogers was in the middle of dinner with the artist and selected patrons, when the fire alarm went off. And so it came to a close with all of us standing around on the wide museum steps, some in strapless dresses and nine-inch heels with an empty glass in hand. 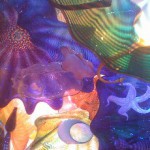 Above: ‘Persians’ ceiling. Below: ‘Reeds’ and ‘Lime Green Icicle Tower’