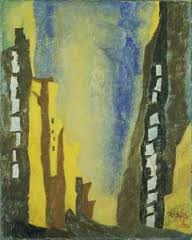 I was surprised to see a poster in the New York subway for a show on Lionel Feininger at the Whitney Museum of American Art. Feininger was German, wasn’t he, even though he fled to the US from the Nazi’s? Fact is, Feininger was born and died in the US.
Thanks to the Whitney I now know more about Feininger and the drama of his life. Lionel Feininger: At the Edge of the Worldshows convincingly what a multi-talented artist he was – painter, watercolorist, illustrator of handsome comic strips, sculptor of charming wood figures, woodblock printmaker, photographer, musician and even composer of thirteen fugues.

One of the small jewels in my bookcase is a little bound book of his watercolors of boats. The angular Cubist planes are all in there, yet there is a warmth and a softness to them which is almost endearing.
He was born in the US – in New York, actually – and didn’t move to Germany until he was sixteen. The Chicago Tribune offered him a job as a cartoonist, but he fell in love at an inconvenient moment and couldn’t get divorced in time to emigrate. Sad for him then but maybe just as well for his artistic career. In 1911 he moved on to painting, and in 1911 he not only came into contact with the painters of the expressionist Die Brücke, but also showed his work at the Salon des Indépendents in Paris.
Thanks to his American passport he got through World War I all right – scarcity of materials started him off making woodblock prints, using the covers of his cigar boxes when need be, of crystalline-like buildings. After the war he taught at the Bauhaus and was very productive, with his well-known planes of warm, rich, transparent color. My favorite is of a church interior from 1926, de Barfüsskirche. He revisited some of his subjects many times, such as the Baltic Sea village of Deep and the church and spire of the village of Gelmeroda near Weimar.
The same passport made it possible for him to emigrate to the US in 1937, after the Nazi’s had closed the Bauhaus where he was a teacher. Feiniger left Nazi Germany just in time: a month later the Nazi’s confiscated all his paintings from the various museums and included some in the Entartete Kunst exhibition – which we would now consider an honor.
He was 66 when he arrived in the US in 1937, and life would never be the same. He started painting again, but what the Whitney shows of these last twenty years of his life is a repetition of what went before. He died in 1956 in the same city where he was born and where, aptly, his first American retrospective is now being held. 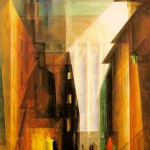 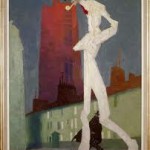 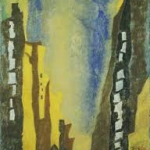