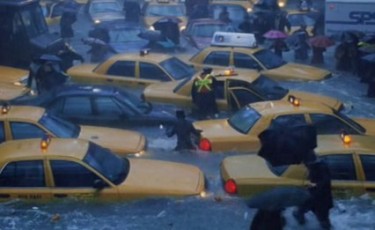 An earthquake and a huge hurricane in one week: the east coast of the US is having a hard time. Buzzfeed.com posted 20 ‘photos’ of what New York City will look like tomorrow when hurricane Irene gets there. Water cascading down the subway steps, waves crashing into the Statue of Liberty at waist height, fleets of yellow cabs in the streets up to their gills in water. I’ll be interested to compare them to what really happens tomorrow. Especially since in my new book Sweet&Salt: Water and the Dutch I’ll be discussing New York’s forward-looking attempts to prepare for climate change and rising waters.

Mayor Bloomberg is on tv warning people to fill their sinks and bathtubs now with fresh water, charge their phones and leave the low-lying areas  for the shelters. they can hold 70,000, the mayor said, but by Saturday afternoon there were only 1400 takers.

Bloomberg is one of the few civic leaders in the US who has come out unabashedly and said that the city has to prepare for the changing climate, no matter what is causing that change. Irene may turn out to be real political boost for his preparedness campaign. 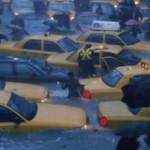 Buzzfeed.com: What New York City will look like on Sunday