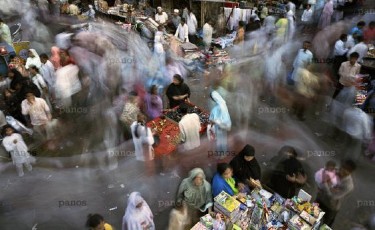 The photographer Martin Roemers is having a peak moment. Today the New York Times published a 15-part slide show and an article by himself on his project ‘Metropolis’, an impressive long-running series of photographs of cities of 10 million inhabitants and more.

He won the World Press Photo award in 2011 for this project, which includes Mumbai, Kolkota, Djakarta. Istanbul and Manila – I chose a photograph from ‘Metropolis’, taken in Mumbai, as my contribution to the exhibition ‘Rollercoaster’ which opened last week at the Museum of the Image in Breda.  I first saw this project last year at the Noorderlicht exhibition called Metropolis: City Life in the Urban Age. By leaving the shutter open for a long time, he captures the small, almost private details of the individuals on the streets – commuters, shoppers, passers-by – in the midst of the overwhelming and colorful swirls of traffic. A very relevant project now that 75% of the world’s population will live in cities within the next decades. According to the United Nations, there will be 37 megacities by 2025.

As if this were not enough, Roemers also published a number of photographs from his series The Eyes of War, on blind victims of World War II on May 4th, the day the Dutch commemorate their war dead, in NRC Handelsblad.

Photos: Mumbai, Phnom Penh and Kolkota | an image from ‘The Eyes of War’