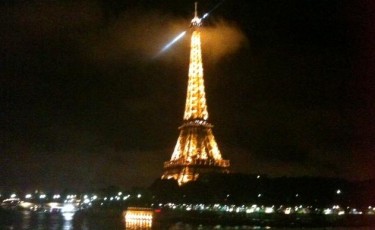 This short iPhone-movie shows the Eiffel Tower sparkling brightly on the other side of the Seine at midnight. In retrospect it’s amazing to think how controversial Gustave Eiffel’s proposal was for the construction of a tower of cast iron for the World Exhibition of 1889.  He compared it to the Egyptian pyramids: ‘My tower will be the tallest edifice ever erected by man. Why would something admirable in Egypt become hideous and ridiculous in Paris?’

It wasn’t his design, by the way; he bought the patent on a design by Stephen Sauvestre. But he did take the flak for it, and it was thanks to his belief in this enormous folly, still the tallest building in Paris, that it got built. Its uselessness is in large part its beauty – especially when it rises lit and sparkling over the dark river, its white ray of light at the very top circling in the mist. 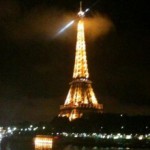