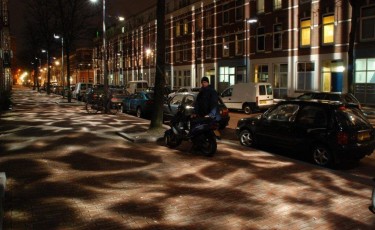 The city of Rotterdam asked a group of artists to help rejuvenate the former harbor area of Katendrecht through the use of light. the winner of the competition was Rudolf Teunissen of Daglicht & Vorm. His award-winning design projects a wavy pattern on the street and siewalk and narrow pennants of lights on the facades of the social income housing. In the beginning the inhabitants were wary, but now they’re proud of the way that lighting project ‘Broken Light’ has softened the look and feel of the street. Read my story for Architectural Record here.