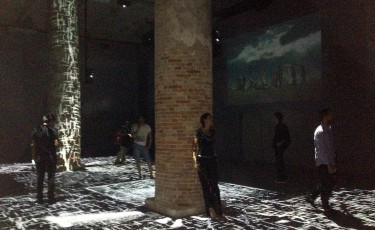 Lord Norman Foster’s spectacular installation in the Arsenale is all about people; the buildings are the décor. At a heart-stopping pace images flash around the four walls, images of people sharing an experience. Those range from the ecstatic to the traumatic: a pilgrimage, a goal in the stadium, a charge by the riot police. Meanwhile the names of hundreds of architects from all ages and places – from Borromini to Bunshaft, from Sert to Fuller – swirl in white letters over the black floor.

Under the curatorship of the English architect David Chipperfield, this year the Venice Biennale has opened up, both in the issues it addresses and in the way the participants present themselves. Never before has the Biennale had such a strong social thrust; never before was it such a mea culpa on the part of the profession. ,,All good architects sincerely believe they are contributing to society,” Chipperfield said at the opening press conference, ,,but society is mistrustful. It sees them as self-promoting, autobiographical animals.” Or as urbanist Rahul Mehotra of Harvard’s GSD remarked in a panel discussion entitled ‘A Better World’: ,,Impatient capital is running the world and architecture has become a slave to it.”
Well, at the moment there is not much capital around, impatient or otherwise. The economic crisis is forcing architects to rethink fundamental questions such as: what are we building, and for whom? And how do we tell our story? Paradoxically, as the quantity of the production goes down, the quality of the presentation goes up. Sleep-inducing models and axionometrics have made way for moving images, soundscapes, sculptures and social media.
The American pavilion is particularly successful in this respect, and was rewarded by a special mention from the international jury. The designers of the exhibition Spontaneous Interventions: Design Actions for the Common Good – Freecell’s banners, M-A-D’s timelines and Interboro’s outdoor mini-auditorium – were essential in making the 124 (!) projects attractive and accessible. Why so many? I asked David van der Leer, co-curator together with Cathy Lang Ho and Ned Cramer. ,,Because we want to show that this is a movement”, he said. All 124 are examples of ‘micro-urbanism’, such as ‘chair bombing’, DIY bikelanes projected in light on either side of you, new uses for streets rather than just for traffic, chicken coops made out of supermarket carts, vegetable gardens on former parking lots – heartening things that anyone can do if you band together.
As with any form of backlash, there is a danger that the baby will be thrown out with the bathwater. Daniel Burnham impressed on us ‘Make no small plans’, but is there in among the urban beehives and the guerrilla bike lanes still room for big thoughts, ambitious plans, for innovation, for poetry? For beauty pure and simple? Fortunately, there is. Alvaro Siza made a space out of red walls wrapped around three trees in the Giardini. The Polish pavilion showed how to make do with what is already there by creating a sound installation in the bare gray interior of its pavilion. And the Dutch hung a moving curtain by Petra Blaisse in theirs – no answer to the tough economic and financial choices of the moment, but an ephemeral reflection on the experience of space. As if to say: let’s not forget that this too is what architecture is about. 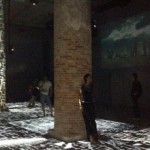