My Venice Biennale 2012 #2: Rebuilding after the tsunami 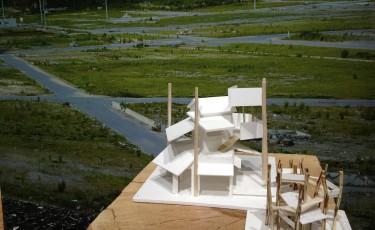 The Japanse pavilion at the Biennale brings tears to your eyes. No matter how brave the attempts by Toyo Ito and Sanaa to rebuild the hard-hit area, nothing will give the people whose houses were devastated by the tsunami their lives back.
But you still have to try.

In the Arsenale in Venice Sanaa displays an enormous, beautiful cardboard model of the island of Miyato-jima. Blue lines show how high the water came. They have been working there pro bono since the earthquake and the tsunami in March 2011, which washed away more than half of the 260 homes on the island.

Toyo Ito brought in three young architects – Kumiko Inui, Sou Fujimoto and Akihisa Hirata – to start the project ‘Home-for-All’, for the design and construction of a new gathering place. The location is the town of Rikuzentakata, which the local photographer Naoya Hatakeyama had photographed extensively both before and after the disaster.

This was only one of the many settlements over a 400 kilometer long stretch of coast where 20,000 people were drowned and 400,000 lost their homes. Many of the designs for a ‘Home-for-All’ use felled trees as columns. Not only were there a huge amount of them in the debris, but the pine forest also used to be a place where locals gathered to chat and relax.
Ito calls the exhibition in the Venetian pavilion ‘Architecture: Possible Here?’. Under the same title he contributed a box of rocks from Rikuzentakata to the ‘Wunderkammer’ in the Arsenale. The question marks refers not only to the daunting scale of the job ahead, but also to the purpose of architecture itself. ,,Since the modern period, architecture has been rated highest for its originality”, he writes in the accompanying brochure. ,,As a result the most primal themes – why a building is made, and for whom – have been forgotten. A disaster zone where everything is lost offers the perfect opportunity for us to take a fresh look, from the ground up, at what architecture really is.”
This is a theme that recurs – under the skin – over and over in this Biennale: crisis, be it economic or physical as in Japan, is forcing architecture to rethink what is really important.

Model for a new gathering place using felled trees, in front of a photograph of the bare lots where the village Rikuzentakata once stood; box of rocks from the hardhit area of Japan that Toyo Ito contributed to the ‘Wunderkammer’ in the Arsenale; images by Naoya Hakateyama of the place where he grew up before and after the tsunami; some of the designs for a new gathering place; the cardboard model by Sanaa for reconstruction of the island Miyato-jima