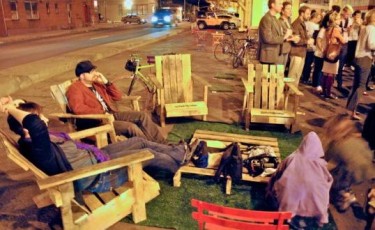 They call it ‘chairbombing’. Just the simple act of putting a chair on the sidewalk and sitting in it is a protest against a 2011 law that forbids people in San Francisco to sit or lie in public space. These chairs, and the initiative, came from Brooklyn-based design collective DoTank, which makes these chairs from old shipping pallets. In San Francisco they pinned a note to them, saying: ,,These are more than places to sit. They are a visual resistance to the privatization of public space.”

The chairbombs are one of no fewer than 124 examples of ‘micro-urbanism’ on show at the US pavilion at the Venice Biennale this year, in an exhibition called
Spontaneous Interventions: Design Actions for the Common Good.

I asked David van der Leer, architecture curator at the Guggenheim and together with Cathy Lang Ho and Ned Cramer co-curator in Venice: why so many? ,,We want to show that this is a movement”, was his direct response. ,,It is all about how people are now taking their city and their neighborhoods into their own hands and are making them better.”
In choosing these 124 out of the 450 submissions, beauty was not a criterium. ,,To me some of the projects are outright ugly”, Van der Leer says. ,,But that is not the issue. The point is that these bottom-up initiatives are now an important force shaping the built environment.”
One of the 124 is Doug Burnham, founder of Envelope A+Dstudio in the Bay Area. ,,In Hayes Valley there was a two-block area that was formerly covered by a freeway until it collapsed in the 1989 earthquake. There was a plan to build housing here, but that was shelved after the crisis hit in 2008.” The mayor’s office asked the studio to do something here that would help people perceive these empty lots as valuable space. ,,So I designed ‘Proxy’, with shipping containers providing temporary space for a shop of the Museum of Art and Design, a beergarten, an event space and a food place with a rotating chef. For Proxy we are both architect and developer.”
Some of my other favorites (as you can tell by the images) were the cardboard pop-up wedding chapel by Z-A Architects (I wrote about it for NRC, Dutch speakers can read it here) and the guerrilla knitters who ‘yarnbombed’ the famous Wall Street bull. I also recently interviewed Cameron Sinclair, co-founder of Architecture for Humanity, in which he mentions Fresh Moves, the converted buses that bring produce from local farms to underserved communities, a.k.a. food deserts, in Chicago.

A lot of projects have to do with urban cycling, such as the bike lanes that people go out and paint themselves at night. One of the most low-key projects is that of artist Graham Coreil-Allen who takes people on walking tours of his home town, Baltimore. As chance would have it, the Atlantic Cities website published a story this week on how gratifying it can be to take people around the place you love.
You graze your way through the show, randomly pulling down banners (an idea from Freecell) that provide succinct information and images. Putting it all up in the air means that the space itself remains open. Brilliant! On the back the banners are color-coded for the show’s six themes: information, accessibility, community (the biggest scorer, of course), economy, sustainability and pleasure. The floor is the info-heavy base, with timelines that narrate important moments in urban history and activism. Outside, Interboro built an ‘outdoor living room’, modeled on the raised planks Venice uses during high water, with orange foam cubes as stools that will be donated to local Venetian playgrounds after the Biennale.

The projects are interesting and the theme is topical – and apt, given the theme of the whole Biennale, ‘Common ground’. But the success of the show – and of the pavilion’s special mention by the jury, the first one ever for the US – is every bit as much thanks to the exhibition design.

Chairbombing’, out of protest against a law forbidding people to sit or lie in public; inside the US pavilion; ‘Intersection repair’ to calm traffic; pop-up wedding chapel of cardboard in Central Park; self-painted guerrilla bike lanes; Graham Coreil-Allen’s artist-guided walking tours; Architecture for Humanity’s Fresh Moves food bus; yarnbombing of the Wall Street bull; Proxy-project rings new life in shipping containers to the site of a former highway in the Bay Area