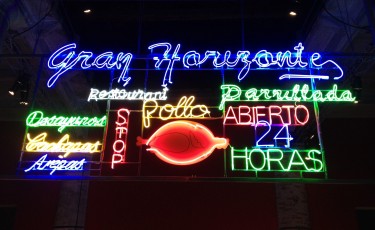 With beer, Latin food, loud music and salsa dancing, Urban Think Tank’s Venezuelan bar was of course the hottest venue at the 2012 Architecture Biennale, which closes this weekend. Architecture’s bad boys Alfredo Brillembourg and Hubert Klumpner, together with co-curators Justin McGuirk and photographer Iwan Baan, won the Golden Lion for the Biennale’s best project with their portrait of Torre David, a ‘vertical slum’ in downtown Caracas.

The construction of the 45 meter tall skyscraper was abandonded in the mid-nineties when the bank it was supposed to house went bankrupt. Three hunderd families camped out on the ground floor for three months and eventually took over the entire building, without electricity or water. Now over 750 families live there and it also houses a church, restaurants, hair salons and tailors. Urbanism by the people, for the people.

‘This is the real city!’ proclaims Klumpner, surrounded by Iwan Baan’s wonderful images of life in Torre David, in rooms made of blankets, cardboard and sometimes of aerated concrete building blocks. ‘This is a laboratory of what is relevant today!’

‘Architects nowadays need not only building intelligence, but also operational intelligence,’ says Klumpner, who as the head of urban design at the ETH in Zürich is in a position to propagate his ideas. ‘All the rules and regulations we learned about have lost their meaning. Archtiects have to throw out the handbooks and get out into the city and see what is really happening in places we don’t know or understand. Stop this whole post-colonial idea of telling people how to live. We should not longer build and then occupy – in Torre David people occupied the building first and then negotiated with each other on how to share the space.’ What in the mid-nineties probably seemed like a failed developer project, is now a new model for vernacular vertical communities.