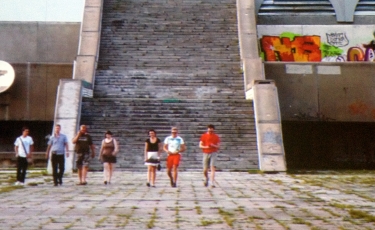 How long is the life of a building? The question is the title of the Estonian contribution to the 2012 Venice Architecture Biennale. It is a poignant, relevant, well-conceived investigation into the nature and the fate of the Linnahall, a humongous Soviet-era pile of concrete reminiscent of an Aztec pyramid at the harbor of Tallinn.

The Linnahall was built in 1980 as a massive palace for culture and sports, with a 5000-seat amphitheater and a 3000-seat ice hall, on the occasion of the yacht races that were part of the Moscow Olympics. It was celebrated when it opened for its bold architecture, designed by Raine Karp and Riina Altmäe, but with the fall of the Soviet regime the building too felt into disrepute.

It later was turned into a nightclub, but closed for good in 2009. On one of the two large screens that compose the exhibition in Venice, images slide by of the neglected building, covered with graffiti and with weeds shooting up between the endless flights of stairs.

On the other screen various people tell about their memories of the building. The art historian who remembers hanging out on the roof drinking beer with friends in the eighties, watching the ships bringing tourists, ,,wondering what it would be like if we could go on that boat”. The actor/director who had a radio station in the cellar in the nineties, called ‘the Guard of the Republic’. The student who says: ,,It’s empty now, the Russian stars don’t come here anymore”. And the theater director, with a hilarious and typically Soviet story about how the stage was temporary for all 32 years of its life. The hydraulic system for the podium was delivered too late, and by the time it reached Tallinn there was nobody who knew how to install it.

How long is the life of the Linnahall? In actual use quite short, but in reality Tallinn is stuck with this striking architectural-political anachronism, reminiscent of the Nazis’ vacation colony Prora on the island of Rügen. But according to the sitewww.architectuul.com the Linnahall may get a new lease on life: in August 2010 an investor and the city of Tallinn agreed to refurbish Linnahall, which is now a protected landmark, as a new sports and entertainment venue, with a hotel and a casino on the grounds. And in May 2012 the US Embassy announced that the CEO of Hard Rock International has visited the Linnahall and was considering ‘contributing to its renovation’.

According to Carl-Dag Lige of the Estonia Architecture Center, however, says refurbishment plans of the Linnahall are not under active consideration at the moment. ,,The building still waits for the politicians, economy and larger society to make up their minds (so to say). What has changed during the last couple of years (and increasingly during the Biennale), is that the negative attitude towards Soviet architectural heritage in Estonia has started to decrease. Society, especially younger people, doesn’t have the ‘political filter’ anymore and people are now able to value particular buildings for their architectural quality.” The Linnahall seems to have a long life after all. 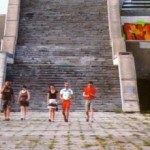