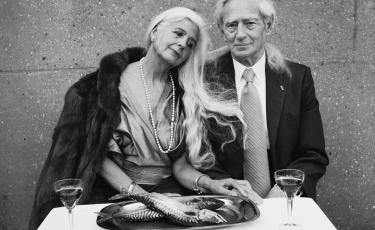 War, migration, religion, love, identity – all the big themes are there, shimmering beneath the surface of ‘Time Tells’, a beautiful, poignant exhibition by photographer Diana Blok. It is at Witteveen visual arts center, Konijnenstraat 16A, Amsterdam, through Saturday  Nov. 10th. There is also a handsome book and a documentary she made in collaboration with filmmaker Sonia Herman Dolz.
In this seven-year project Diana Blok relates her family’s history in images. The themes are big but the artist’s touch is light; the story is as universal as it is intimate. Of course her wonderful portrait of her parents is there, her mother leaning toward her husband’s shoulder, her long white hair draped over him.
Her father was an Amsterdam Jew, her mother Argentinian and Catholic. They met in Buenos Aires shortly after the Second World War, thanks to the Turkish ambassador to The Hague. The ambassador had brought Blok’s father Philip in 1939 from The Netherlands to Buenos Aires, thereby saving him from the fate that overtook his parents and only brother: Auschwitz.

‘My father never talked about his Jewish background and my mother said it wasn’t true,’ Diana says. ‘His faith and the fate of his family were kept secret. He even changed his father’s name on my birth certificate from Mozes to Martin. My three sisters and I found out, though, when we were teenagers.’
Her father started his career as a diplomat at the Dutch embassy in Buenos Aires and met his wife there. A chance meeting in Istanbul many years later brought Diana into contact with the children of the Turkish ambassador who had brought Philip to Argentina; two of the three of them became diplomats themselves. A picture of her father in the exhibition shows him on the front step of a building together with embassy secretary Mr. Mizrachi.

Diana Blok still wonders whether the ambassador was Jewish too. ‘Atatürk started recruiting Jews for the enlightened Turkey he envisioned; they had the knowledge and the banking experience that he needed.’
The convoluted relationship to Judaism is expressed in striking images of the Wailing Wall with notes stuffed in the crevices between the stones. With one simple transformation, the ‘invert’ button in Photoshop, the images of the Wall were turned into x-rays, revealing what is behind the stoic exterior.

Her mother was a gifted seamstress and made and embroidered delicate garments – a negligée for her wedding trousseau, linen baby shirts for her four daughters, elegant dresses for herself. ‘My father enjoyed being a diplomat, but my mother was more the social butterfly. She loved getting dressed up and going to teas, charity events, cocktail parties.’ Diana photographed many of the diaphanous undergarments her mother made in such a way that you seem to see a living, breathing body inside them – they are her. She also lives on in her dresses, such as in the (self-)portrait that Diana made of herself and her sisters all wearing their mother’s dresses.
One photo shows a linen napkin folded to resemble a boat. It is the only linen object in the exhibition not made by Diana’s mother. The napkin is a symbol, she says, of all the migrations that together make up the story of this, and of so many families. 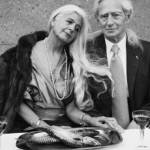 The photographer’s parents, and other images by Diana Blok from ‘Time Tells’