Theaster Gates’ labor is his protest 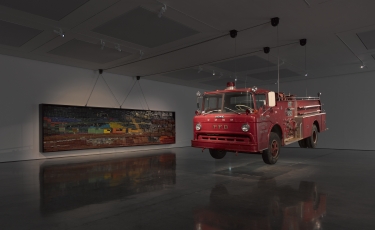 This story also appeared on the Loeb Fellowship blog, check it out here

Incongruously, there is a big yellow fire truck parked outside theWhite Cube Gallery in Bermondsley, the area in southeastern London that is gentrifying at breakneck speed. Inside there is a big red fire truck which, even more incongruously, is hanging from the ceiling, its tires dangling helplessly in the air like the legs of a baby in a highchair. The fire trucks are eyecatching elements in the newest exhibition of Theaster Gates (LF ’11), called My Labor Is My Protest.
This is the third and newest location in London of the famous White Cube Gallery, which made a name for itself by launching artists such as Tracey Emin and Damien Hirst. This venue opened last fall in a 1970’s warehouse and is now Europe’s largest commercial gallery.
It is a powerful show that investigates race and history through sculptures, installations and film. Gates describes the hoisting the red fire truck – itself a symbol of the repression of race riots – into the air as a way to ‘hoist the history of the Civil Rights out of view, making it both weightless and invisible’. And of course by the very act of doing so, the opposite is achieved. Opposite the fire truck he has filled a huge metal case with bound volumes of Ebony, JET, Negro Digest and Black Stars, with leaflets crammed into the interstices like the notes in the crevices of the Wailing Wall in Jerusalem. Anything but weightless.
Like the fire truck, tar has a special significance for Gates. His father worked as a roofer during the 1968 riots in Chicago, and in a film we see Gates ceremoniously tarring the yellow fire truck while the Black Monks of Mississippi sing – his labor is his protest. The tar cart stands in one of the galleries, you can smell it faintly, surrounded by panels of tarred wood, carpet and wire; in other galleries there are several works made of decommissioned fire hoses.
The first room of My Labor is the Library, where in huge floor-to-ceiling bookshelves Gates has housed a selection of books on black history – ‘Negro Slave Songs in the United States’, for example, and ‘The Black Book’ – borrowed from Johnson Publishing Company (JPC), producer of Ebony and JET. Founded in 1942, it grew into the largest black-owned publisher in the US.
Gates (1973) is perhaps best known for his community art practice, the Dorchester Projects on Chicago’s South Side. It is a group of three houses he has repurposed to serve as ‘a site of community action and uplift’, a sould food kitchen and spaces for artists in residence. One will house the Johnson Publishing archive that he used in My Labor Is My Protest; there are also large collections of books from the former Prairie Avenue Bookstore, 60,000 slides from the University of Chicago Art History department and 8,000 LP’s from record company Wax Records. Gates was also prominently featured at last year’s Armory Show in New York and this year’s Documenta in Kassel, Germany. 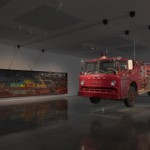