Water Lessons from NL for NY 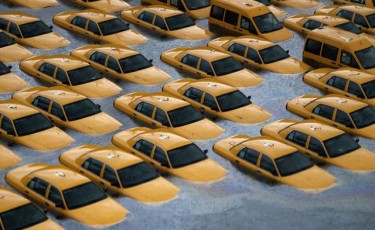 In the wake of Hurricane Sandy, Dutch experts assert that New York needs hybrid solutions for our changing natural surroundings. For Architectural Record I wrote ‘Water Lessons‘, on how the Dutch view the hurricane: a disaster waiting to happen.

Hurricane Sandy and the devastation it left in its wake were a disaster waiting to happen. That is not only the conclusion of the American Society of Civil Engineers, which warned in 2009 that a storm surge was all but inevitable, but also of Dutch experts who have advised New York on its water safety.

After hurricane Irene in 2011 the city commissioned Jeroen Aerts, professor of water and climate risk at the Institute for Environmental Studies at Amsterdam’s Free University, to compare existing measures such as zoning, building codes, and flood insurance to the cost and effectiveness of large-scale megastructures such as storm-surge barriers. The presentation of the first draft of his conclusions was planned for this coming February.

Aerts estimates the costs of an entire new water safety system at anywhere between 25 and 30 billion dollars. “In New York the economic damage weighs more heavily than in, for example, New Orleans,” he says. “Yes, that is a lot of money, but the cost of prevention may turn out to be lower than the combined costs of repairs and the losses incurred by businesses, such as the stock market, which can’t function because they have no power and because people can’t get to work.” As the coastal areas have become more heavily settled the damage skyrockets. Flood insurance is mandatory for getting a mortgage, but Aerts notes that the cost is kept artificially low, so that no one is discouraged from building on prime waterfront property – i.e. flood-prone areas.

Aerts favors what he calls “hybrid solutions.” That could mean building storm-surge barriers in the Lower Bay and the East River between Long Island and the Bronx. Such barriers would have to form a semi-open structure to allow the passage of tides and ships. But mega-structures should be combined with stricter zoning and building codes and the protection of vital infrastructure, for example, by building dikes around power plants and moving transformers to higher ground. “A year ago, I suggested to the Metropolitan Transit Authority that they build flood doors in the subway tunnels that close automatically when water flows in. There are a lot of relatively simple ways to minimize damage,” says Aerts.

Keeping the waterfront open will encourage more innovation, Aerts believes. The Dutch themselves are now investigating such an approach for their own country, where 60 percent of the GDP is earned below sea level. Confronted with the ecological flipside of large mega-structures that disrupt the natural balance, Dutch engineers and landscape architects are now working together to devise defense systems that are effective but more in concordance with natural systems. They are lowering dikes to create spillways along the major rivers; designing multifunctional dikes that not only keep the water out, but also create space for houses, roads and recreation; making more space for water retention, for example by adding bypasses to the rivers; and creating flexible urban designs that can accommodate both high and low water.

Han Meyer, professor of urban design at the Technical University in Delft, sees promise in the reconstruction of Brooklyn’s abandoned harbors. “The city already wants to take down a raised highway there. Put that highway on a dike which protects the land behind the dike and make any buildings that are built outside the dike waterproof,” he says. As an example he points to HafenCity, the former harbor of Hamburg, where the houses and elevated roads and walkways are built on large concrete bases that can serve as water storage areas during floods.

Landscape architect Jandirk Hoekstra of the firm H+N+S, who has led a multidisciplinary design study of the Dutch coast, hopes that Sandy will increase awareness that water safety is a collective issue. “That is something that the Dutch have always been aware of, especially since this country is dependent on that collective system for its very existence” says Hoekstra. “Individuals can buy flood insurance, but you can’t ask individuals to protect an entire stretch of coast. After Sandy it is inevitable that there will be major public investment.”

“Our memories are short,” says Aerts. In his consultation with the city of New York he saw calculations by the Massachusetts Institute of Technology of 550 different variations on storms and hurricanes, and the city was always in their path. “In 1938 there was serious hurricane damage to Long Island, in 1960 La Guardia airport was flooded, in 1990 the subway flooded,” he reports. Hurricane Sandy is a wake-up call, unmistakable proof of the region’s vulnerability to high water. It could be an opportunity to rethink the city’s future and its relationship to its changing natural surroundings.

Tracy Metz is Record’s international correspondent in the Netherlands. Her newest book ‘Sweet&Salt: Water and the Dutch’ addresses the changing approach of the Dutch to dealing with floods and droughts. A review appeared on Record’s website. 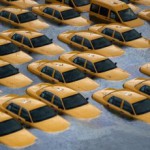