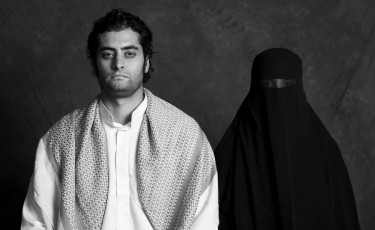 One of this year’s surprises at Paris Photo was East Wing, a new international platform for photography and art from the ‘Greater Middle East’ located in Doha, Qatar. Creative director is Hester Keijser, whom I knew as the perceptive blogger on photographyMrs. Deane. East Wing started just five months ago and presented itself this fall at both Amsterdam’s new photo fair Unseen and at Paris Photo.

The Greater Middle East includes work by the Afghan Masood Kamandy (the Los Angeles County of Art recently bought work of his), the Iranian Newsha Tavakolian (Dutch readers know her from NRC Handelsblad) and the Yemenite Boushra Almutawakel. She shows two series, ‘What If’ in which a man is gradually dressed in his wife’s veil and gloves, and another in which a mother, daughter and doll are swathed step by step in black veils, even the doll.

East Wing’s scope is even broader. There is work by the Dutch artist/architect collaboration of Bas Princen and Anne Holtrop, and by the Belgian Gert Jochems. French-Chinese photographerBenoît Vollmer shows a series he made during a residency in France, in which he registers not the landscape but the wind as it moves the trees in that landscape. The Vietnamese-Laotian (‘We have a lot of hyphenated identities here,’ says Keijser) Tiane Doan na Champassak made polaroids of Thai transgenders, scanned them and printed them by hand on Cibachrome, giving them a timeless, ethereal quality. Jochems and Champassak were included in guest curator David Lynch’s personal route through Paris Photo, ‘Vu par David Lynch’.

Funding comes from Qatar’s royal family; one of the sheikhs collects photography. East Wing plans to open galleries in both Doha and Dubai.