When he opens his eyes, Wout Berger sees the IJsselmeer 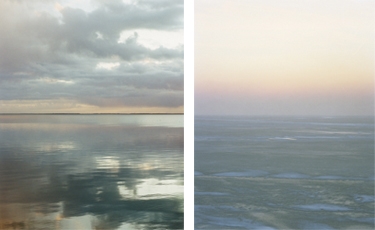 The Dutch photographer Wout Berger lives in the small town of Uitdam, on the big body of freshwater near Amsterdam called the IJssel lake, ‘het IJsselmeer’. Every day when he opens his eyes, it is the first thing he sees. He lives in his subject. In 2009 he started photographing it regularly and now, at the end of 2012, his beautiful book has appeared, When I Open My Eyes, with 64 of the some 150 photographs he took over the course of two and a half years. At the De Pont museum in Tilburg there is an exhibition of a number of large prints from the series, through Jan. 6th, 2013. A wonderful photograph by Wout Berger of skaters on the frozen IJsselmeer was also included in the exhibition curated by Maartje van den Heuvel for our project ‘Sweet&Salt: Water and the Dutch’. His approach to photography is: ‘I try to show what you see when you focus on what is right in front of you.’

The images in the book are in more or less chronological order, showing how the photographer became more and more intrigued by the diffuse gray tones of the light, the sky and the water. ‘At first you’re grateful for every sailboat that comes along,’ he writes in the short, pointed text in the front of the book. ‘But before long you start keeping every distraction out of the picture. I no longer photograph sailboats. Nor do I photograph birds, or people. I do take pictures of little waves, patches of fog, rain and clouds.’

The contrasts become more subdued, the horizon disappears in abstract formations of cloud and mist in which distance loses its meaning. The repetition of the same subject matter in endless variations gives these pictures a strong meditative character. Same? ‘Imperceptibly, the subject begins to change,’ he writes. ‘While it was initally all about the body of water, the horizon, the sun, the clouds, the wave, unnoticeably the subject becomes the differences among the photographs. The transitions.’

Book designer Tessa van der Waals chose a kind of paper that contains a bit of cotton, making the paper soft to the touch. The paper also softens the images, giving them a painterly quality. when I aksed Wout if that was intentional, he said: ‘No, they are not meant to look like paintings. I try to register what I see as precisely as possible, close to reality.” But he also says that the big prints in the De Pont do look a bit like paintings – Rothko, is his own association. I can see that.