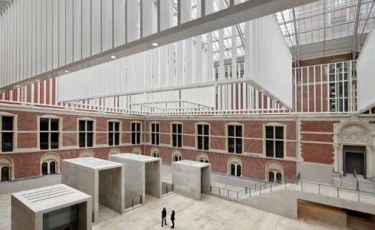 In recent months the museum hogging the cultural spotlight in Amsterdam has been the Stedelijk, which opened in December after a nine-year renovation and expansion. (Read Justin Davidson’s review.) Many critics have panned its extension, designed by Benthem Crouwel and dubbed the “bathtub.”
But this spring, attention will turn to the $500 million expansion of the Rijksmuseum, which shares a public square with the Stedelijk. It has undergone its own tumultuous 10-year planning, permitting, and building process, plagued by budget overruns and an acrimonious dispute about access for cyclists. Museum director Wim Pijbes, and with him all of the Netherlands, will heave a sigh of relief when it reopens on April 13.
In 2000, the national government decided that after more than a century of intense use—the museum receives over 1 million visitors per year—the Rijksmuseum needed a major overhaul. The Seville, Spain–based firm Cruz y Ortiz won the international design competition for the expansion in 2001. The interior design is by Jean-Michel Wilmotte, known for his work at the Louvre. Architects Antonio Cruz and Antonio Ortiz were faced with the challenge of bringing Pierre Cuypers’s stern, symmetrical neo-Gothic structure from 1885 up to 21st-century museum standards. During the renovation, the museum’s motto has been “Continue with Cuypers.” That meant renovating and cleaning up the existing building, which had become cluttered with added floors and walls. Even the interior courtyards, designed as sculpture gardens, had been sacrificed in the never-ending quest for more space.
To untangle this jumble and accommodate a predicted 2 million visitors per year in the near future, the architects created reception and ticketing areas, an auditorium, and a shop by going down—an ingenious but expensive solution, considering Amsterdam’s soggy ground. A new main hall under the 323,000-square-foot building gives visitors a logical starting point and unites the east and west wings for the first time. Cruz y Ortiz also added a stand-alone pavilion for Asian art surrounded by water. In total, the architects added 32,000 square feet of new construction.
The presentation of the art is also undergoing a transformation. The previous director, Ronald de Leeuw, felt the museum should tell the story of eight centuries of Dutch history chronologically. Now more than 30 galleries will be dedicated to the 17th-century Golden Age. New galleries will also represent Dutch culture in the 20th century. The only artwork to stay in the same place, in the Gallery of Honor, will be Rembrandt’s famous Night Watch. For the first time, both the magnificent library and the formal gardens will be accessible to the public. The villa that in Cuypers’s time housed the Teekenschool, or the Drawing School, will become a multidisciplinary educational center.
One of the thorniest issues confronting the museum was the public street that it straddles; the street has always served as an important link for cyclists between the center and the south of Amsterdam. When the museum was constructed, the south deeded the land to the city center under the strict stipulation that the street remain open in perpetuity. During the renovation, however, the museum closed it. After years of tense negotiations, the city decided to reopen the street for cyclists.
The Rijksmuseum looks north to the city center and south to Museum Square, the plaza it shares not only with the Stedelijk but also with the Van Gogh Museum (closed for renovation but expected to reopen in May) and the Concertgebouw concert hall. By summer, Amsterdam, and millions of visitors, should be able to revel in a new chapter of cultural wealth.

This article appeared on the website of Architectural Record in January 2013.