World’s highest pyramids in Estonia – made of waste

This is going to be the first tax optimalization landscape in Europe, maybe even in the world. It will be in a remote corner of Europe, in the northeast of Estonia, in the town of Aidu near the Russian border. Other than the country’s usual lakes and forests (about half of Estonia is covered with trees) Aidu has one unique selling point: 20 meters under the limestone in the ground, there is oil shale. To get to it, the mines have exploded tons of limestone. With this waste product, architecture firm KTA has created an impressive landscape of sculpted pyramids, ancient and futuristic at the same time. There’ s a lot of waste limestone: each year almost 1 million cubic meter of it is excavated to get to the oil shale. European law requires Estonia to pay a pollution tax of 1 euro per cubic meter if the stone is just piled up without being used. The city council of Aidu came to KTA in the capital city of Tallinn to ask whether they could think up a use for it that would not only avoid the tax, but also create jobs and attract visitors.

,,In 20 years there will be 18 million cubic meters of limestone”, says Mikhel Tüür, who together with Ott Kadarik forms KT Arhitektid. ,,With that you can build a group of pyramids of 600 meters by 1.2 kilometers – about the size of the Forbidden City in Beijing – and 155 meters high. We have shaped them in a series of terraces of 6 meters high. Inside there will be wine cellars and a mining museum, on the outside a ski slope, a small cemetery, an amphitheater, a park and a guest center with a restaurant.” The group of pyramids should be surrounded by water, says Tüür, but the discussion about whether to access them by boat or by a bridge is ongoing. KTA has drawn an entire series of artistic fantasies to show the role the pyramids will play in the landscape in the future. They showed the project at the Baltic pavilion at the 2016 Venice Architecture Biennial. ,,In Estonia nobody really believes this is going to happen”, says Mikhel Tüür. ,,But there is already a permit for an even higher pyramid, of 70 meters, and Aidu is now preparing the site.” The new tax landscape could be a reality in 2030. And these will be the highest pyramids in the world, even higher than the famous ones in Giza at 138.8 meters high.

The use of oil shale – Estonia has 17 percent of the total deposits in the EU – is hotly debated, the architect says. ,,Energy-wise it is not very efficient, but we get 90 percent of our power from it and it makes us independent in our energy supply. The Japanese are smarter, they use it to make acoustic panels for car doors. We just burn it.” In order to reach the shale, the 20 meter thick layer of limestone has to be exploded. That makes the stone unsuitable for use in construction, as the explosions cause microcracks where water can get in and freeze the stone apart.

Is it a building or a colossal landscape? Tüür: ,,Stone is a building material, so it is a building. The pyramids add value for Aidu: they not only solve the waste problem, but also create jobs and a landmark that will bring new activity  to this part of Estonia.” 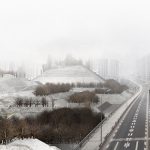 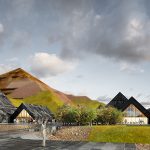 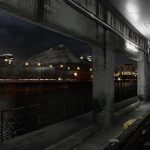 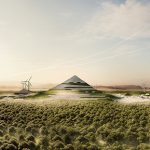 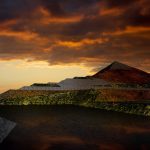