Shock of the new in Riga 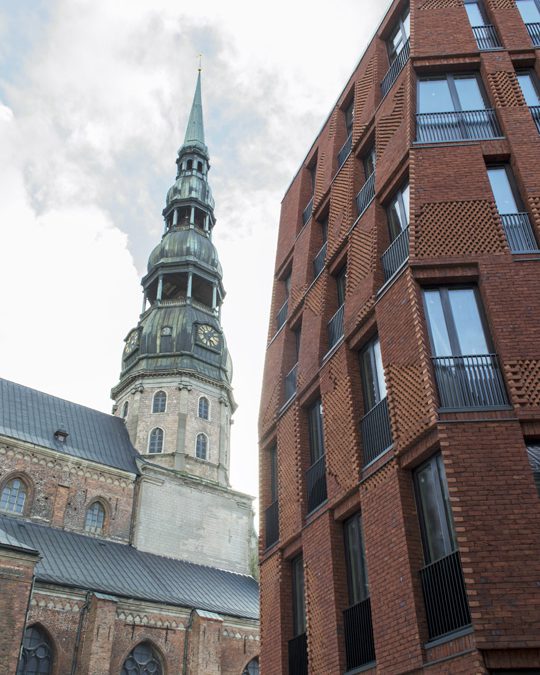 During my travels through the Baltic states, I write short observations.

The historic center of the Latvia’s capital, Riga, is charming, with cobbled streets, beautifully kept parks and imposing churches. Nothing, therefore, prepared me for the surprise of coming face to face with a strikingly sculptural and hypermodern red brick apartment building, between two medieval churches.  This is the new face of Riga. The architects are a couple, Martins Jaunromans and Mara Abele, both 39. Their design was for a competition in 2006 (by law in Latvia competitions have to be held for all new buildings). ,,A lot of people were worried about entrusting such an important location in the city to two architects who had just turned thirty!” laughs Abele. And then last year this little jewel won Latvia’s national architecture award.

Their office is in one of Riga’s traditional 19th century wooden houses, faded red on the outside and with weathered walls on the inside. In places the plaster has fallen off altogether and the wooden strips under it protude. There is a piano next to the wooden meeting table and, of course, models everywhere. Several are of their entry together with the English firm Caruso St John for the new Latvian contemporary art museum. Alas: it was announced a month ago that the winner was David Adjaye together with the local firm AB3D. The museum is expected to open in 2021, at a cost of 30 million euro. The museum will be built as part of New Hanza City, a new district of 24 hectares at a former railway goods station in the north of the city.

How was it possible to build something so modern  in this historical, Unesco-protected environment? Totally contemporary though the building is, its roots are deeply historical, the architects point out. ,,Before World War II, there was already a five-story apartment building here, with a butcher shop on the ground floor.” This new iteration started with a competition in 2006 – in Latvia a competition must be held for all new buildings – by a developer who insisted on a contemporary and sculptural building. ,,Our Landmarks Commission also feels strongly that new buildings must look contemporary, not like copies of the old”, says Jaunromans. Nevertheless, he tells me, there is a debate in Riga about whether to make all new buildings the same height, namely six floors. ,,Bad idea”, he says, ,,it is special for Riga that above the old wooden houses like ours, you can see the trees in the gardens behind.”

The facetted facades of the apartment building , which holds 5 apartments of 100-120 square meters, spiral upwards one floor at a time, and on each surface the bricklaying pattern is different. I couldn’t tell that there was a story to that evolving pattern, but Jaunromans and Abele tell me what it is. ,,Nearby there is a statue based on a fairytale by the Grimm Brothers of the ‘Musicians of Bremen’, about a donkey, a dog, a cat and a rooster set off together for Bremen. they never arrive, because they scare off robbers out a house along the way and settle in themselves. The brick pattern is a projection of this statue onto the building’s facades. ,,We have a strong tradition of building in brick here in Latvia”, says Jaunromans, ,,but that was lost in the Soviet period. During the actual building I was there every day, showing the bricklayers how to cut the brick in order to create this pattern.”

Sadly the building still stands empty. Abele: ,,Three years ago it was bought by Russian investors who own several buildings in the center of Riga. Maybe they’re waiting for the price to go up.”

See below the designs for the future Latvian Contemporary Art Museum: David Adjaye with AB3D, Caruso St John with Jaunromans un Abele, Henning Larsen with MARK, Sauerbruch Hutton with Ingurds Lazdins, Neutelings Riedijk with Brigita Bula, Lahdelma & Mahlamäki with MADE, and wHY with Outofbox and ALPS. 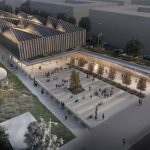 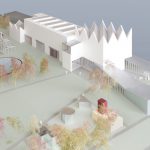 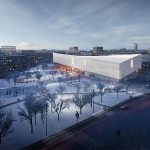 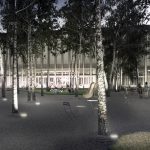 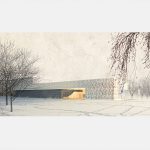 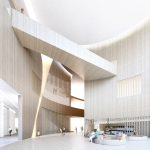 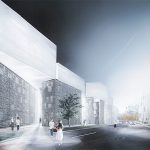