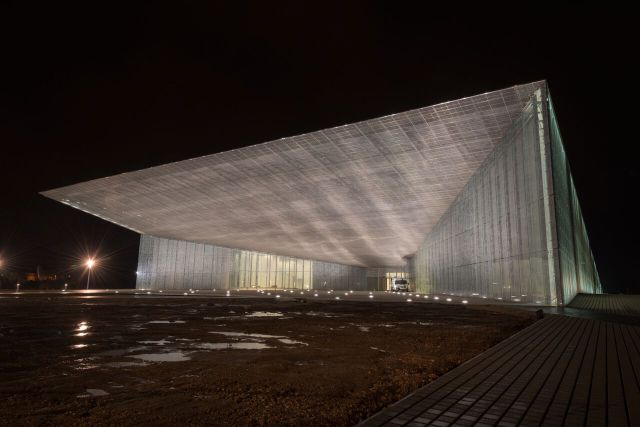 Look closely at the photo below: on the far right you can just barely discern a human figure. That gives you an idea how big the new building for the Estonian National Museum is in the city of Tartu, which opens to the public next week, on Oct. 1st, 2016. It’s huge: 356 meters long, 72 meters wide, and 15 meters high at the front, sloping down gradually to just over 2 at the back. One of the world’s smallest countries now has one of the world’s biggest museums, at a cost of 75 million euro’s. The only bigger cultural building in the country is the Linnahall, built by the Soviets on the occasion of the 1980 Olympic Games. The location is no coincidence: the museum was originally located in a manor  a stone’s throw away. Next to the manor the Soviets built a secret bomber base during their occupation of Estonia from World War II until 1991. During the Soviet occupation an area of ten square kilometers around the base was cordoned off with barbed wire, and the museum’s collection went into hiding in various locations around the city (since 1993 it has been located in a bloodless 1960’s building that was previously a club for railway workers). Now, the new museum reappropriates this forbidden zone with a building whose sloping form echoes a plane taking off. The museum was designed by the Paris-based firm DGT Architects (Dan Dorell, Lina Ghotmeh and Tsuyoshi Tane), and is their first to be built. DGT was one of a hundred firms to respond to a competition in 2005 (although Tartu had been working on plans for a national museum since the early nineties). Controversy about both the location and the cost delayed the building process for years. The building is a glass-walled ‘bridge’ over two ponds, with large lightwells above the shop and the stairs. The glass is fritted to screen the interior from the sun with a design inspired by Estonia’s national geometric patterns. The spaces are generous to say the least, verging on the cavernous. In addition to conference space and a cinema it has three main areas: permanent exhibitions on Estonian culture and on the Finno-Ugric language groups, and a temporary exhibition of nine hundred column-free square meters. Through a glass floor visitors can look down in to the depot and see the museum’s three thousand wooden beer tankards from the eighteenth and nineteenth centuries. It houses the one million objects in Estonia’s ethnographic collection – the national art collection went to the KuMu (Kunstimuuseum) which was built in Tallinn ten years ago – whose founding father was the ‘king of Estonian folklore’ Jacob Hurt. “Until 150 years ago Estonia was a peasant nation,” says journalist and head of communications Kaarel Tarand, “and for centuries we had only an oral culture. Here you can see how we have developed into the most digital country in the world.” Indeed, visitors will get a chip card when they enter with which they can change the language on the displays from Estonian to English, Russian and Finnish. 120 large screens will show films and the museum’s entire photo collection. The museum is finally open, but the cost issues are not over. “The museum is eight times as big as it was,” says Tarand, “but the budget for staff is not.” He takes comfort from the knowledge that Estonians are great museum lovers: on average they go three times a year. “It is part of our national pride. We want to be a civilized nation. And our history as a nation is so short.”