Rewriting history with bullets, flares and a carpet 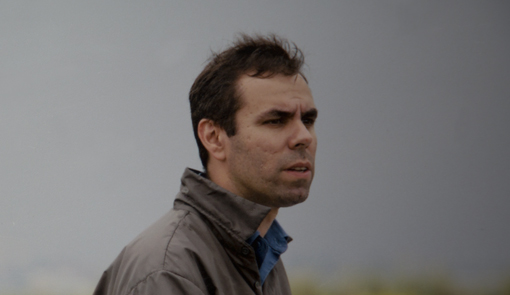 The Spanish artist Fernando Sánchez Castillo is fascinated by power and its counterpart, the abuse of power. And so he is fascinated by dictators, not lastly Spain’s own Franco. I interviewed him earlier this year for NRC about his impressive exhibition in Den Bosch, where he showed a most unusual relic: two of Franco’s eyelashes.
Sánchez was in Amsterdam recently for the Art Weekend. At his gallery Tegenboschvanvreden he showed his most recent project, about a bloody confrontation between students and police in 1968 in the Mexican new town of Tlatelolco.

That was the year that Mexico hosted the Olympics, and it was also a turbulent time of student protest. Government forces cracked down on a demonstration on the Square of the Three Cultures and three hundred students and bystanders were killed. Even more bonechilling: as recently as 2014, 43 students who were on their way to Mexico City to commemorate this event, were kidnapped along the way and murdered. The wounds from ’68 are still fresh.
Sánchez sneaks up on this gruesome episode in Mexico’s (very) recent history by surprising means: a carpet, a video, drawings, a small statue and a series of 43 memorial silver coins with bullet holes in them. One for each student in 2014. They were minted to celebrate the 1968 Olympics. Sánchez found a sniper who could shoot a neat hole in the middle of all of them – not an easy job. The small, starkly lit statue is also an homage to the 43 students: a young man facing the wall with his hands tied above his head and his pants around his ankles. But.. a carpet? “Mexico has a long tradition of telling stories through crafts”, the artist says. “The image on the carpet is a map drawn by an officer eight months after the events in 1968, in an attempt to reconstruct what had happened. You see the buildings around the square and lots of lines crisscross over it, showing the movement of the government troops and the lines of fire.” Sánchez once saw this map briefly in a documentary, but it took a long search to finally find a copy of it in a book. “The government has bought up all the books about this and destroyed them.” The video shows the buildings around the square, inside and out, eerily lit by red, green and white flares. The red and green ones were reportedly the secret code for the government forces to start shooting, both by snipers and from helicopters. “We were able to get a permit to film there because we added white flares. The Mexican flag is red, green and white – so our story was that we were filming the flag.” Nevertheless it was all very tense, says Sánchez. “I was glad to be back on the plane out.”
The show was called ‘Stilstellung’, a concept which the philosopher Walter Benjamin used to mean the dramatic moment in which all action comes to a sudden halt – a cliffhanger. It was also Benjamin who said: ‘History is written by the victors’. Fernando Sánchez Castillo’s mission is the continual rewriting of that history by artistic means. 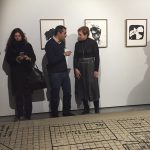 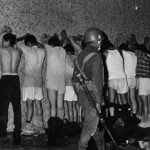 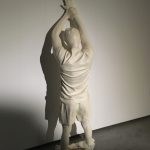 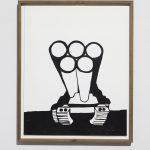 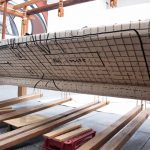