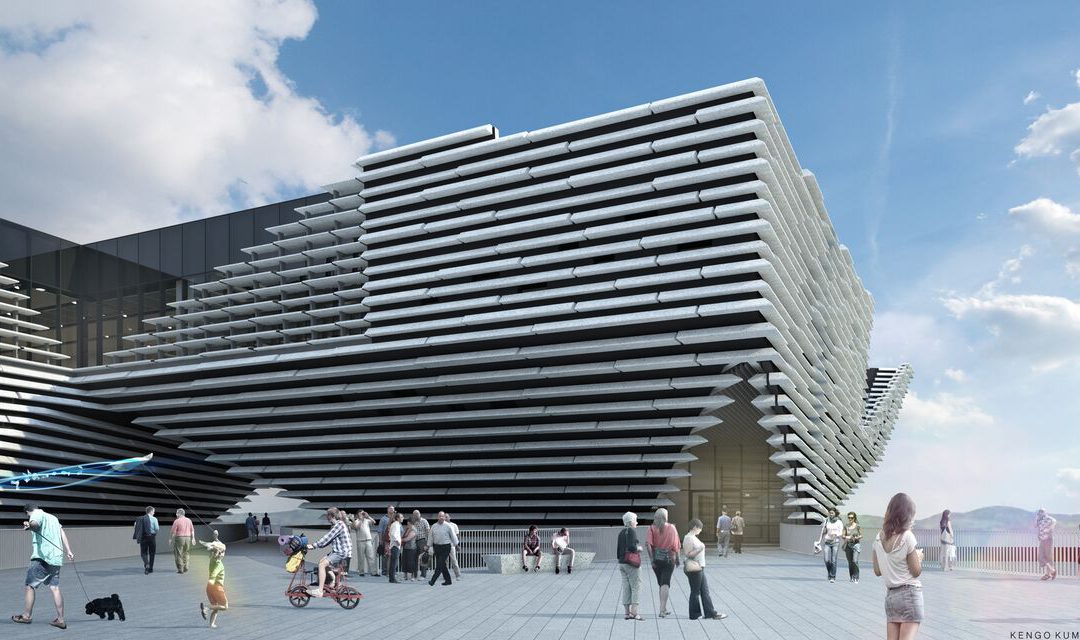 The V&A Museum in London is opening a new museum next year specially for Scottish design, in the coastal city Dundee, the fourth largest city of Scotland. The huge building on the river Tay is the outcome of an international competition won by the Japanese architect Kengo Kuma, who is also designing Tokyo’s Olympic stadium for 2020. The V&A is also one of the founding institutions of a new design museum, Design Society, which is to open this October in the Chinese city of Shenzen.

At a cost of £81 million pounds the new V&A Dundee is already 80 per cent over budget, and will open four years later than anticipated. No wonder the museum is not yet giving a date for the opening next year. Nevertheless, it is the linchpin of Dundee’s regeneration through culture and the arts, together with its lively scene for the creators of video games. Dundee is now a serious contender for the European Cultural Capital of 2023. ‘The ugly-duckling city comes of age’, was the headline of a piece in The Times in July.

“It’s not so long since film directors looking to recreate the horrors of the Soviet Union,” wrote The Times, “but unable to penetrate the Iron Curtain, used Dundee’s hideous 1960s cityscape as a more than adequate alternative.” Now, however, there are new public gardens, new hotels and shops – many yet to be filled – and soon the new museum. And along with all of that, there is a new confidence, says Tara Wainwright, marketing manager of the V&A Dundee.

Dundee, a city of shipyards and burlap manufacturers, was already in decline and was hard hit in the recent crisis, although less so than Aberdeen which has suffered under the decline of the oil industry. “In Aberdeen there was so much money in oil that there was not room for much else”, she explains. “Dundee has invested much more in regeneration through culture.” The city shies away from a comparison with Bilbao, but like Bilbao with its Guggenheim by Frank Gehry, Dundee has already seen an upswing in tourism and in investments. But to get to the waterfront from the city center, you still have to cross an busy four-lane road. Will that be redone, I ask? The answer: “It’s already been redone.” 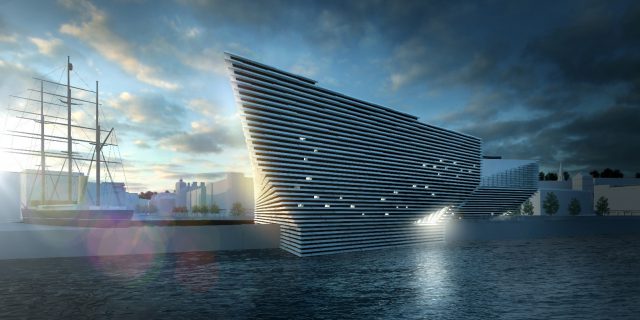 Next to the new building lies the expedition ship Discovery with which Robert Scott first sailed to the Antarctic in 1901. It was thanks to Dundee’s shipbuilding tradition that it got the commission to build the Discovery, which returned here to retire in 1986. 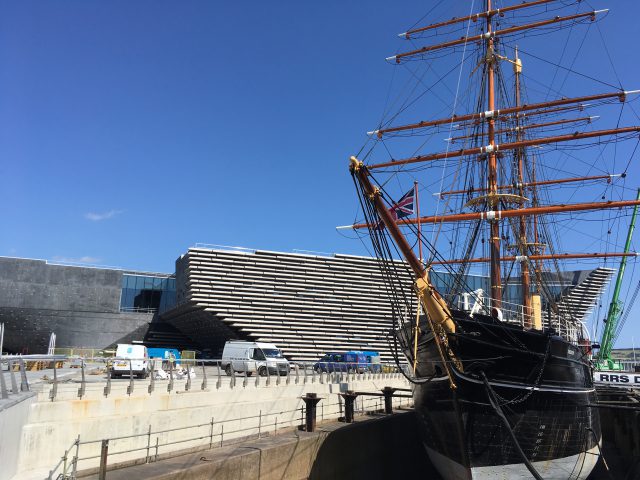 Tara studied at the arts college in Dundee. For her, the new museum feels like a personal justification. “I studied here and then stayed on – now everyone will be able to see why”, she says. I tell her sheepishly that not much comes to mind when I hear the term ‘Scottish design’. “You’re not the only one – that’s why we need this museum,” she says. “It will show Scottish design not only now, but over the past three hundred years. And as for Dundee, it is one of the creative hubs for digital game design now: Lemmings and Grand Theft Auto were born here!” 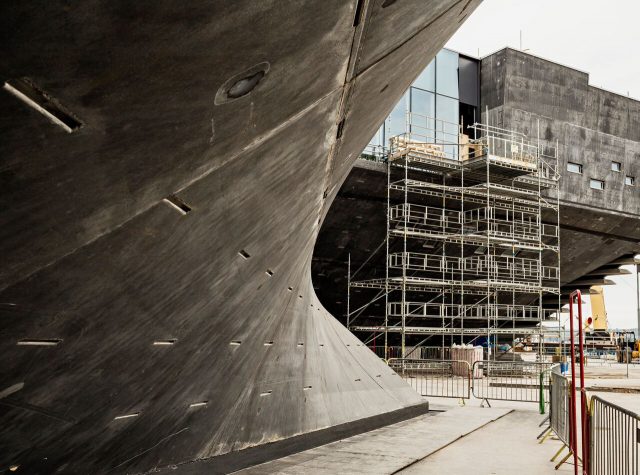 Kuma’s enormous building, which consists of two parts that interconnect on the second floor, has no straight walls – in his philosophy, vertical walls make people feel unwelcome. I for my part feel rather intimidated by this massive concrete construction which looms overhead. One of the two parts will jut like the 18 meter high prow of a ship into the water of the river Tay. “The city has a strong maritime tradition in shipbuilding, fishing and whaling,” says Tara. “And the fact that this project is part of the 30-year, 1 billion pound refurbishment of the former harbor, was one of the reasons the V&A chose Dundee for its second location.”

Kuma has recently drawn a lot of attention with his Olympic stadium for Tokyo but also with smaller projects such as  his plant-covered hotel in Paris and with a delicate interior for a restaurant in New York. In Dundee the walls curve and twist and cantilever 19 meters out over the public space around the museum. The galleries have no columns; the walls are held together by the floors and by roof beams that span a full 30 meters. Concrete louvers are being attached to the outside that will filter the light inside and create ever-changing shadow patterns across the facades. 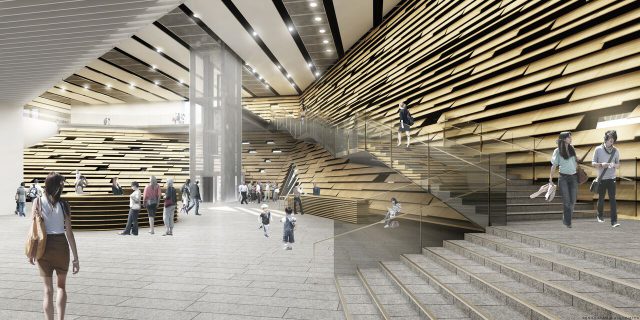 The most famous object in the new museum will be Charles Rennie Mackintosh’s Oak Room from his Ingram Street tearooms in Glasgow. It was built between 1900 and 1912, but in the early seventies it was almost demolished for a hotel development. The city council stepped in and bought it, disassembled it and put it into storage with all 600 parts numbered. The opening next year will coincide with the 150th anniversary of Mackintosh’s birth. The new museum is now organizing a ‘relay’ to get young people involved in the stories these objects tell. Young people from various places in Scotland will work together with Scottish designers to create new prototypes inspired by Scottish designs as varied as the typical ‘hooded’ chair from the Orkey islands, the spherical Dounreay nuclear reactor, a sweater from the Shetland islands and an enamelled plaque from the Scottish Arts & Crafts movement. 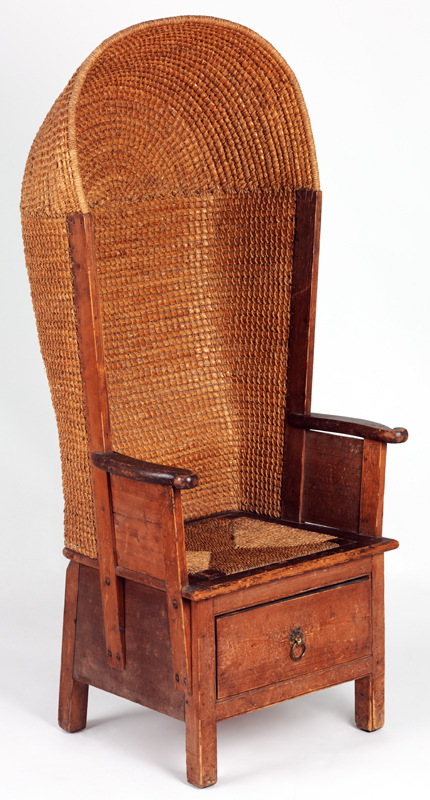 Some 70 percent of the objects will be on loan for 25 years from the depots of the V&A in London, where they are seldom seen by the public.

My video blog on the V&A Dundee: https://www.youtube.com/watch?v=pW5OasUeuWQ&t=29s

Drone film of the building under construction: https://www.youtube.com/watch?v=80ypcegfEvU