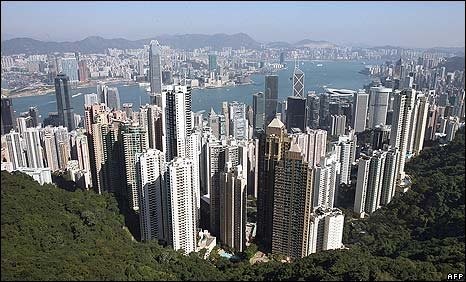 Hong Kong: that is the world’s most densely populated city, an island of glistening skyscrapers, fashion and fast money, the most expensive real estate in the world against a backdrop of rugged mountains. Right? But the city also has a hidden life, on high and down below. Two fascinating books – as well as the ‘Homes for All’ video that Max Hirsh and Xiaoxuan Lu made for the digital magazine of my talkshow Stadsleven – shine a stark light on Hong Kong’s housing dilemma’s.

In between the glitz and the glamor of the tall buildings snakes an entire network of small alleys with a life of their own. That is the subject of the book Hong Kong In-Between by the Swiss architects Geraldine Borio and Caroline Wüthrich.

And there is another whole hidden world of informal villages on the rooftops of many of Hong Kong’s old eight-storey tenement buildings. In their book Portraits from Above- Hong Kong’s Informal Rooftop Communities, Rufina Wu and Stefan Canham take us with them into this invisible world.

On high or down below, both groups of residents have in common that they struggle to survive, and are studiously ignored by the authorities.

STools that are also bAGs

Geraldine Borio teaches at the Polytechnic University in Hong Kong and took her students with her into the back alleys. She found craftsmen there with tiny shops of sometimes less than a meter deep, such as Uncle Chan, Uncle Hung and Mr. Tang.

Some of them sleep in metal boxes suspended over the sidewalk. In order to sit down and observe life in the alleys, she and her students needed portable stools. So she asked these craftsmen to produce STAGs for them: STools that are also bAGs, made of recycled advertising banners that you can carry with you like a light backpack.

,,Being from Switzerland, I am interested in chaos and in the rules behind what looks like chaos”, says Geraldine, who herself has recently moved out of the congested city to an island off the coast. “Asian cities develop so fast that you can see the layers one on top of the other.” Take Hong Kong, with its British street grid and the Chinese shophouses with lanes behind them. “Many of the old shophouses have been demolished to make way for towers and the lanes are now fragmented. These spaces are not part of the ‘official’ city, but they are actually very homey – like living rooms.”

After meeting Geraldine, I walk through the city with different eyes. I not only notice more of these lanes, but also the evidence of the life lived there: an awning here, a folding door there, some low plastic stools, some crates for the vegetable stall that will reappear in the morning, a modest clothesline on which someone has hung all their worldly possessions. After this project, Geraldine told me, she became aware of this whole new side to the city: a porous interface between formal and informal, between wealthy and poor, between day and night.

“The back lanes are informal, yes, but they are not slums,” Geraldine says. “People live here, they make a living, they have access to public transport. Hong Kong’s back lanes are very much alive. Perhaps this is the last remaining fertile land of the city: the in-between spaces.”

Even less visible to the passerby are the mini-villages on the roofs of many dilapidated tenement buildings in the city’s poor neighborhoods. For their project Portraits from Above – Hong Kong’s Informal Rooftop Communities, Rufina Wu and Stefan Canham somehow managed to get access to these marginalized communities, which he photographed and she drew. They call these rooftop settlements ‘the informal skyline of Hong Kong’. The people living here have no other options, in a prosperous city of over 7 million inhabitants and almost 7.000 per km2.

The contrast could not be greater between these and a new Hong Kong rooftop project like the polished ‘SkyPark’ in the neighbourhood of Mongkok, by the Dutch studio Concrete. They call it the tower’s ‘Clubhouse’, with a pool, a restaurant, outside seating and sophisticated lighting. ‘Skypark provides an escape from the city with its communal clubhouse and outside park on the very top of the building,’ according to Concrete’s site. This, too, is Hong Kong.

Portraits from Above is impressive in every way – not only in its thorough documentation, but also in the persistence and the empathy with which the authors have gained entrance and also gained people’s trust. The residents are not on the photographs, but the authors tell us many of their stories. In Sham Shui Po district, for example, six rooftops have been connected by ladders and chairs and accommodate – probably – ten households. In one of the units corrugated sheets are hung with string to channel the rainwater into a plastic basin. “This couple never has visitors. They find their current living conditions to be an embarrassment.” Another unit has no toilet, but the woman living there thinks it is worth it since she doesn’t have to share her cooking space. Not all rooftop living is dreadful. Some of these apartments are big and relatively luxurious, and many people enjoy the lively social life. One roof in Tai Kok Tsui Area for example holds as many as 35 units, some even three storeys high, all linked by a maze of corridors and stairs. In two of them the Pakistani residents keep the doors wide open as they and their guests in the ‘Pakistani Penthouse’ “move from one flat to the other chatting, eating, drinking, watching tv and singing along to music videos”.

In a well-informed final essay, Dr. Ernest Chui of the University of Hong Kong explains how these ‘houses’ float in a legal no man’s land – illegal, but tolerated and even recognized – after all, the post office delivers their mail, the government provides them with water, and the public utilities provide them with telephone, tv, gas and electricity.

What it all boils down to, is that the local government only takes action against the rooftop housing when there are complaints. Not only are the units themselves shaky, but also the residents’ rights. All the residents tell the researchers that, although many of them would like a nicer flat, they fear being evicted and sent off to the new towns on the edge of the city, where transportation is expensive and they know no one. They don’t know who to fear more, ruthless landlords or the government.

It is now twenty years ago that Hong Kong passed from British rule to Chinese dominion, under a special arrangement allowing Hong Kong its own legislature and economic status. Its position between East and West allowed it to develop into one of Asia’s economic powerhouses. Now, however, China is tightening its grip on Hong Kong, and the milestone was marked by not by celebrations but by protests.