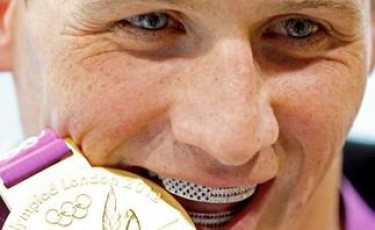 When the American swimmer Ryan Lochte won gold at the London Olympics this week, his smile was bigger news than his medal. He was wearing a $25,000 dollar ‘dental grill’ made of diamonds in the Stars & Strips pattern of the flag. Right next to his picture in the Fashion & Style section of the New York Times was an ad for a very different kind of smile: a child with a harelip. The ad was for a charity called SmileTrain that collects money for operations on harelips. I can’t help wondering how many harelips can be repaired – i.e., people be given a life – for that $25,000? And isn’t a flag-smile a political statement that should disqualify Lochte? And now that I’m on a rant anyway, what’s a whitey doing with a rapper fashion now a decade old?

I’ll bet the NYT did it on purpose.