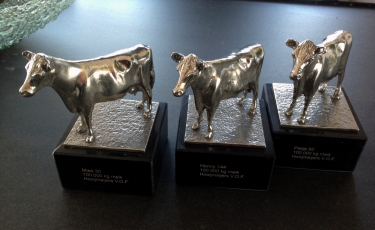 When a cow gives more than 100.000 liters of milk during her lifetime, her owner gets a small silver-colored statuette with a plaque with her name on it. Dairy farmer Nol Hooijmaijers and his wife Wil have had three of these prize animals: Mies 30, Henny 144 and Pietje 60. Their statues take pride of place on the countertop in their brand-new kitchen.
Nol and his wife moved to their new farmhouse here in the Overdiepsepolder, in the southeastern province of Brabant, just two weeks ago. It is bright, light and much more modern than their old farm down the road, where they started 35 years ago. The new farm is on a five-meter high mound, so that when the adjacent river is running high, the excess water can flow unimpeded into the polder, thereby preventing flooding in the city of Den Bosch upstream.
I’m here with Michael Kimmelman, architecture critic of the New York Times. Since Sandy, New York is very interested in how the Dutch deal with water. I was here two years ago as part of my research for the book ‘Sweet&Salt: Water and the Dutch’, about the ‘extreme makeover’ of the Dutch landscape to accommodate a new relationship to water. And here that means lowering the dikes and letting the water in.
Does Nol feel comfortable in this newfangled place? ‘Yes, it was designed by Wil’s brother, we talked it over a lot. And since our son will take over the farm, it is important that the house and the stall are well-equipped for him.’ The family is planning on increasing the herd from 75 milk cows to 110.
The Overdiepsepolder, in the province of Brabant, was reclaimed from the water centuries ago. But it was still inundated in the winter, and farmers could only use it to grow hay in the summer. In the fifties that changed: with the construction of the Haringvliet sluices, the land became habitable all year round, and gradually 17 farmers settled there.
But the Dutch landscape is nothing if not dynamic, and at the start of the new millennium, under pressure of climate change, government decided that this was one of a number of polders where the dikes would be lowered. These areas will serve as spillways when the rivers run high – and that will happen more often as the climate changes. This is a pilot for ‘Room for the River’, a 2 billion euro national project aimed at increasing the amount of water storage along the rivers and thereby preventing flooding in urban areas.
The Overdiepsepolder is in one sense unique: the inhabitants banded together and made a plan of their own, rather than bucking the government’s decision and hoping for the biggest possible compensation. They decided amongst themselves who would stay in the polder and who would go – not that it was always easy, there were the inevitable tensions and bad feeling, but they did it themselves. Now, instead of 17 farms dotted throughout the polder, there are eight big mounds of almost 2.5 hectare each.
Kimmelman is particularly interested in the social aspects of the transformation of the Overdiepsepolder. ‘We know the design solutions,’ he says. ‘Participation is the hard part.’ In a recent article on the front page of the NYT’s Art and Design section he wrote: ‘The problem is not technological or, from a long-term cost-benefit perspective, financial. Rather it is the existential challenge to the messy democracy we’ve devised. (.) Saving New York and the whole region for the centuries ahead will become a test of civic unity.’